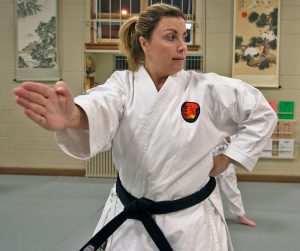 Karate-do translates to empty hand way which is the essential point of karate. Karate evolved in the Ryukyu islands of Japan, specifically Okinawa, and was based heavily on Chinese martial arts. Originally called Chinese Hand, different regions developed their own forms identified as ‘Te’ or hand. Three regions in particular were the dominant ‘te’: Shuri, Naha, and Tomari. In the 1930’s the Japanese martial arts society, known as the “BUTOKU KAI”, adopted “Karate” (Empty Hand) as the formal name for the art.

During Japan’s feudal period, weapons were banned except for those in the ruling class. For this reason fighting styles had to be developed using only the body. Forms (katas) were developed to help students learn fighting techniques based on only the human form, and influenced by the natural world. If caught training, a student training in the arts would simply appear to be performing a dance, rather than training to fight.