Weapon training is something to be taken seriously. Students must have a firm grasp of fundamentals before they begin training with weapons. Therefore, we do not offer a separate program in kobudo. Students are trained from a base in karate that is applied to kobudo. Kobudo classes are not open to all students, but are opened based on belt rank.

Each month, a specific weapon is focused on during kobudo class. Students are expected to have their weapons with them, and in good condition, to take part in class.

Kobudo reinforces the techniques learned in karate classes and is a great deal of fun. Understanding the weapons and how they are used means looking at the martial arts in a historical context unlike anything else. Students get to imagine themselves in battles as they were fought for centuries and in so doing they learn the art behind the weapons. However, they are still weapons and protocol for kobudo classes will be strictly enforced.

Sticks are one of the most common weapons in the martial arts. The reasons for their popularity are simple: they were readily available, and it was common to carry them.

Tonbo (single stick)
Tonbo are taught as both a single and double weapon. At some dojos it is pronounced and spelled “tanbo”. When performed as a pair of weapons, the two tonbo are referred to as ‘escrima’ in reference to the Filipino martial art.

Jo (4′ staff)
The 4′ jo staff is a cut off version of the bo. Jo and tonbo, the 2′ stick, could be used for sword training in the era when weapons were forbidden for the Okinawans. 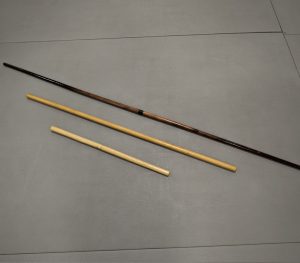 Tonfa (night stick/handled baton)
The tonfa are recognized as the modern side-handled baton, but a close look reveals they are in fact a handle from a grindstone, or churn. Some schools spell it “tongfa”. 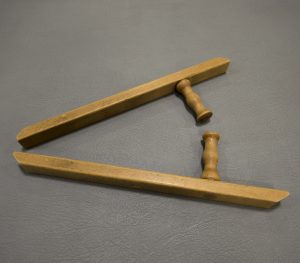 Tanto
The tanto is simply a training knife. While defensive training focuses on unarmed defenders against an attacker wielding a single knife, single and double knife training are a part of our regiment.

Daisho
The Double Long Knife/ Short Sword became popular in the Muromachi period (1336-1573) and worn only by Japan’s samurai class. Because wearing swords in public was banned in 1876, the daisho’s tradition declined, but has now experienced a revival. 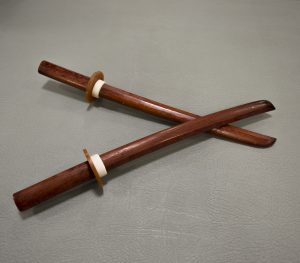 Kama
The kama would have been a common farming tool for gathering rice. Rice would be held in one hand, and cut with the other, unlike the similarly shaped scythe we see in North America. Another common name for the kama is “gama”. 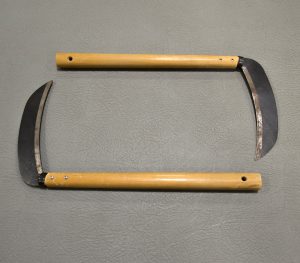 Sai
Sai would have been a fishing tool with blade on the short shaft, and the three points sharpened. Oddly, martial arts movies typically show the sai held by the short handle even though they would be most commonly used by holding the long center spire. 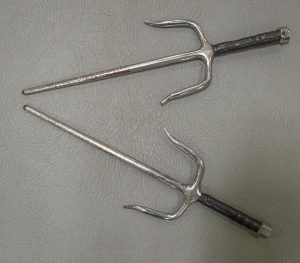 Eku
The oar is needs little explanation in regards to its origin. Referred to as Eku (Sometimes spelled “Eaku” or “Yeku”), the oar kata known as Tsuken aka chu no Eku and originated in the Matayoshi Kobudo system; one of the oldest weapons systems known. 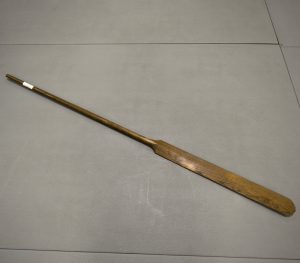 Nunchaku
Nunchaku have been made popular by the flashy tricks seen in hundreds of movies, but they would have been a far more practical weapon in their day. The specific origin is somewhat uncertain since they bare a distinct resemblance to both a rice thrasher, and a horse bridle. 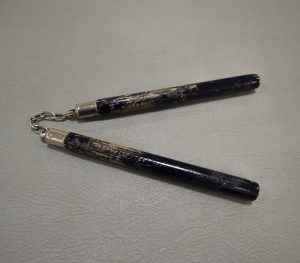