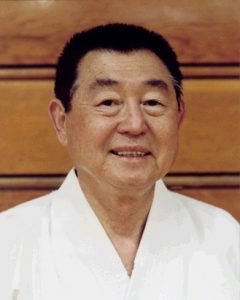 Sensei Richard Kim was born on November 17, 1917, in Honolulu, Hawaii. He began his study of the martial arts with Judo at the age of five in the early 1920’s under Kaneko Sensei. At about the same time he began a study of Karate. He studied under Arakaki Sensei (a disciple of Yabu Kentsu a top student of Itosu) and Tachibana Sensei. Before World War II he travelled to both China and Japan. In China he spent many years studying the internal arts under Chen Chen Yuan and Shorinji ryu under Choa Hsu Lai. At the Nobori Butai he continued his study under a number of Senseis. As a young man he gained entrance into the Dai Nippon Butoku-kai in Japan. It was then that he was taught the Budoju Happan, the eighteen arts. While in Japan Sensei studied Daito-Ryu under Yoshida Kotaro and actually lived with the master for seven years. He became proficient in Japanese weaponry including the sword, spear, tanto and bo as well as in Okinawan weaponry including the bo, jo, sai, tonfa, tecchu, and kama.

For many years, Sensei Fournier had the opportunity to travel and train with Sensei Richard Kim, across Canada and the United States. He also had the privilege of instructing seminars and Karate camps on Sensei Kim’s behalf.

Sensei Richard Kim passed away in November of 2001. He will be sadly missed, but his legacy will live with us forever in our teachings.

Sensei Kim was revered by his many students, and respected by his many friends. As a final tribute to Richard Kim his long time friend, O’Sensei Nishiyama, bestowed the rank of 10th Dan upon him during his eulogy. While in the truest spirit of the martial arts, Sensei Kim never sought higher rank, to all who knew him, this tribute was well deserved.

Today, the Kokusai Butoku Kai with all its branches around the world are working to keep the spirit of Sensei Kim alive. Together the students of Sensei are passing his teachings on to a new generation of martial artists who are pleased to share in this legacy. Through the sharing of stories, and lessons, and by taking part in special events, the next generation of karateka are continuing to gain by learning the Shorinji system and experiencing the enduring wisdom that was so freely given by Sensei Richard Kim.
Sensei left us with many lessons. We are fortunate to have a number of recorded interviews with him on a variety of topics.